Liège, Belgium, May 2021 – The PACTESUR project organised a ‘Local Governance Workshop’ with the City of Liège (Belgium) to discuss their prevention strategy, evacuation procedures and crisis management policy, which gathered local and European security stakeholders, police representatives and security experts as well as the other project partners, on 5-6 May.  Hosted online by Liège, this was PACTESUR’s second Local Governance Workshop following that of Nice (France), in December 2019.

The purpose was to discuss the strategy implemented by Liège to secure its public spaces on a daily basis but also during major events. The consortium (Nice, Liège, Turin, ANCI Piemonte, Métropole Nice-Côte-d’Azur and Efus) and representatives from the Expert Advisory Committee and the Associated Cities Group shared their experience in protecting public spaces against risks across Europe. 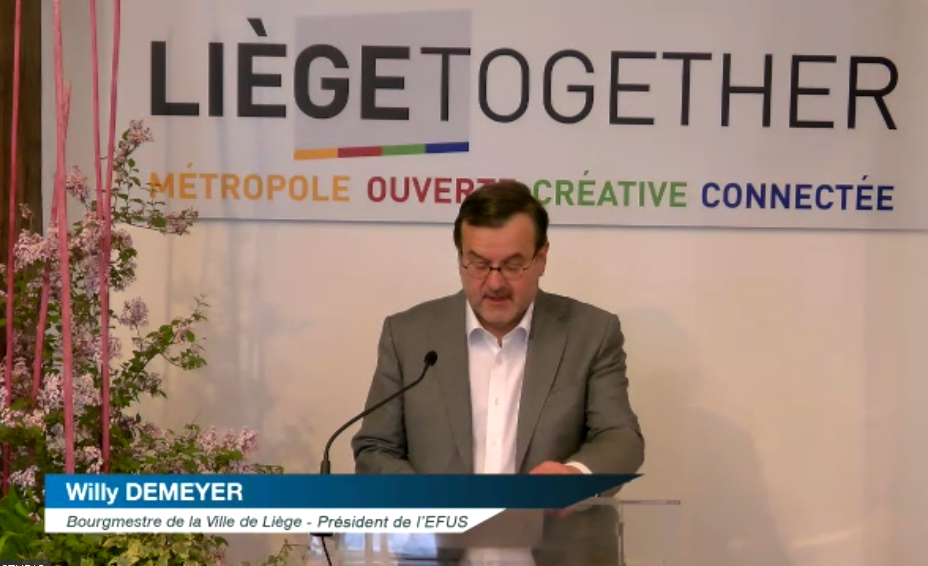 Willy Demeyer, Mayor of the City of Liège and President of Efus, and Elizabeth Johnston, Executive Director of Efus, presented Efus’ integrated and transverse approach to urban security. They require a security policy that is based on cooperation between the different organisations and institutions concerned (local authorities, police, emergency services, urban planners, user representatives). In other words, a genuine co-production of security that guarantees that public spaces remain at once safe, open and accessible to all. As such, the question to which the PACTESUR project seeks to respond is: how to secure urban public spaces in the face of evolving threats, while ensuring that they remain at once safe, open and accessible to all?

On the first day, local stakeholders discussed risk prevention in urban public spaces, security protocols and strategies for major events. A comprehensive and multi-disciplinary response to risk analysis is essential, since measures aiming to counter certain dangers may in fact worsen other risks. For example, reinforcing security measures in a given public space can generate anxiety among the public, who might interpret this as a sign they might be in danger. It is thus important to take a balanced approach and be transparent with citizens about the security tools and  systems in place.

Adapting to new and evolving threats

The second day of the workshop was focused on crisis management issues, emergency evacuation procedures and innovative alarm systems to inform citizens. The City and Police of Liège have developed a comprehensive response against armed assaults against public spaces or venues following the 2015 Paris attacks. This has raised the question of developing specific evacuation procedures. Liège’s plans include designating a WhatsApp group for residents and users of a given building to share information on threats. The Belgium Crisis Centre has also developed BE-Alert, an alarm system that allows the government to inform citizens in an emergency situation. The objective is to deliver a uniform and clear message from an official source to quickly reach as many residents as possible.

A session was dedicated to exploring European perspectives on incidents. The Local Police of Liège revisited the two major terrorist attacks experienced by the City of Liège in the past decade, in 2011 in Place Saint Lambert and in 2018 in a secondary school, Lycée Léonie de Waha. The Local Police of Madrid retraced the 2004 attack in the Atocha railway station, which resulted in 193 deaths and 1,800 injured.

Both police forces discussed their local security strategy, training programmes and prevention strategies and identified lessons learned and improvements. In Madrid, the collaborative effort between first responders, national and municipal police forces, firefighters and emergency medical providers was essential to address what is considered the country’s worst ever terrorist attack. In Liège, communication was shown to be crucial in protecting the public in the immediate aftermath of a terrorist attack. Panic is likely to set in quickly, and the absence of clear, verified information from an official authority can cause both physical and emotional damage. Furthermore, comprehensive training for police officers, both regarding strategic formations and first aid, can prove vital in the event of a terrorist attack, facilitating an efficient and effective response.

The role of design in the protection of public spaces

A group of students from the Sustainable Design School (SDS), led by Design Impact Consultant Laetitia Wolff, presented their Security By Design projects aimed at preserving the attractiveness of public places and creating a sense of belonging when addressing security and safety features. Integrating security tools into existing urban structures and systems can be a challenge, but is an important consideration for the design process, both for supporting functionality and public acceptance.

The SDS, which is based near Nice in Cagnes-sur-Mer, is an associate partner of the PACTESUR project. Through field interviews, the school has carried out a study on perceptions of insecurity among pedestrians using the Promenade des Anglais in Nice. This approach, presented at the first Local Governance Workshop in Nice in December 2019, ensures that the needs and expectations of public space users are collected and analysed when designing safer public spaces – as it includes a multi-actor audit at local level.

Florence Cipolla, PACTESUR Project Coordinator (City of Nice) concluded the workshop by emphasising that work must remain transparent and transverse in order to counter wide-ranging terrorist threats. The third and last Local Governance Workshop will be hosted by Turin (Italy) in the autumn of 2021. It will include specialised training for security actors.