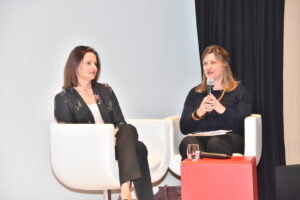 Paris, France, February 2020 – The embassy of Canada in France and Efus co-organised a public meeting on the first survey ever conducted in Canada on security in public and private spaces and gender violence, which gathered about 30 representatives of associations, international cooperation organisations, local authorities and research bodies on 24 February at the embassy of Canada in Paris.

After a presentation of the survey by Julie Sauvé, from the Canadian Center of Justice Statistics, Elizabeth Johnston, Efus Executive Director, moderated a discussion on gender violence and connected security issues. The main takeaway of this exchange was the need to improve data collection on the various forms of gender violence, including in the private sphere, in order to inform adapted responses.
The Canadian government’s investment in this survey sets it apart from the rest of the world, and Efus hopes it will inspire other governments to invest in research, which is crucial in order to inform public action.

Efus and the government of Canada attach great importance to the safety of both genders in the context of the fight for gender equality and against gender violence #StopSexualViolence. In order to continue exchanging on this issue, Efus is considering establishing a partnership with the embassy of Canada with a view to organising an event during the Generation Equality Forum, a global movement for gender equality that is organised by UN Women and presided by France and Mexico. This initiative will culminate in Paris, in July.
Such an event would provide a basis for the exchanges on the gender issue that will take place at Efus’ “Security, Democracy and Cities” international conference (Nice, France, 25-27 November 2020) and result in practical recommendations for local authorities.

> More information on the survey conducted in Canada in the following documents:

> Gender-based violence and unwanted sexual behaviour in Canada, 2018: Initial findings from the Survey of Safety in Public and Private Spaces (report)

> Gender-based violence and unwanted sexual behaviour in Canada, 2018: Initial findings from the Survey of Safety in Public and Private Spaces (article)